Huge success and a big crowd at the reception/opening of my show of the Salt Grass at Beacon Art Gallery in Stone Harbor, New Jersey!!! 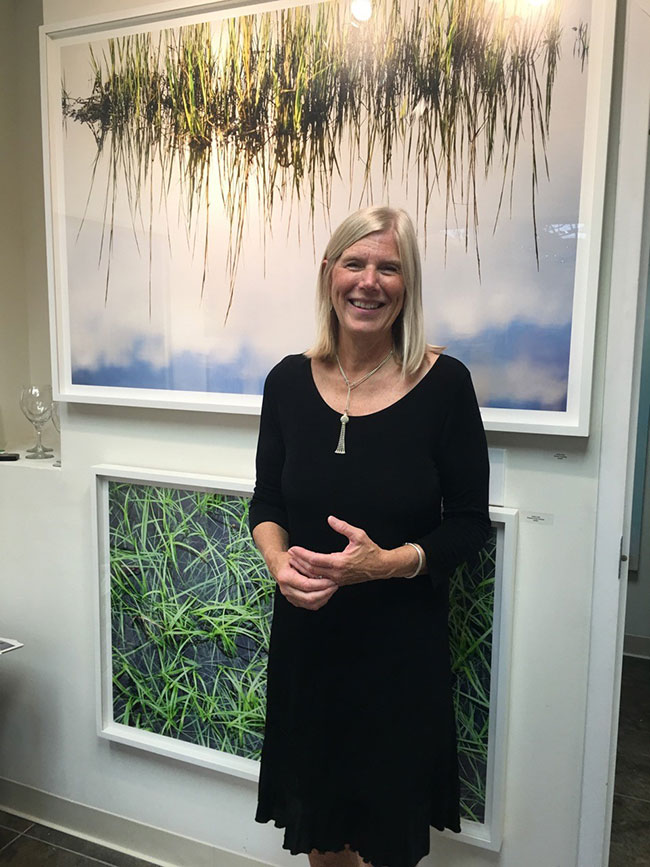 Janet Cass, of Avalon, will have an exhibition of her work, “Capturing Rhythm”

Janet Cass heads out on the waters behind Seven Mile Island every morning at 7 a.m. She travels by kayak, paddling through calm waters or waves, her camera always with her, looking for inspiration.

And she often finds it where the marsh grass meets the water.

“Every year the grass is different and the images that come out are all a little different,” she said.

Her pictures are not the usual landscape shots. She is more interested in how the wind, the light, the moving water and the colors of the wetlands combine, often in images that are almost abstract or seem more like watercolors than photographs.

Cass, of Avalon, said her interest in visual art began at age 10 when she was given a camera. She attended Kutztown University to study fine art painting, but ended up putting the camera and paintbrush down while she raised her kids.

“I was a single mom and ended up having to work, and I had to put it on a back burner,” Cass said. “It wasn’t until both of my kids went off to college 10 years ago that I picked it up again.”

When she finally had free time and started taking pictures again, she had already moved from Philadelphia to South Jersey, and she had a new source of inspiration in the nearby natural world.

Cass said she finds subjects for art every morning she opens her door.

“I would say that art is wherever you are,” Cass said. “And I’m not creating shore scenes or pictures of the oceans or sunsets, so it’s actually a little bit different than what people expect down here.”

It took her a while to get up the courage to ask Beacon Art Gallery to show her photos to the public.

“I had just been rejected by the gallery next door. I showed them (Beacon) my work and they told me to bring back some pieces. It’s been a great relationship ever since,” Cass said.

Cass said her biggest influences are abstract artists such as Paul Clay — but she tries not to have other artists in mind while she works.

“I actually try to not look at too many photographers because I don’t want to be influenced by them,” Cass said. “ I kind of think that artists have to be a little careful when having an exhibit or selling work that they have to remember that they are doing the art for themselves.”

She goes to California during the winter and sometimes travels out of the country. But surprisingly, she doesn’t take pictures when she travels.

“I kind of have to be familiar with my place and understand it and get to know it. I find the best art for me that way,” she said.

And she finds the best way to know this place, and its art, is to paddle her kayak.